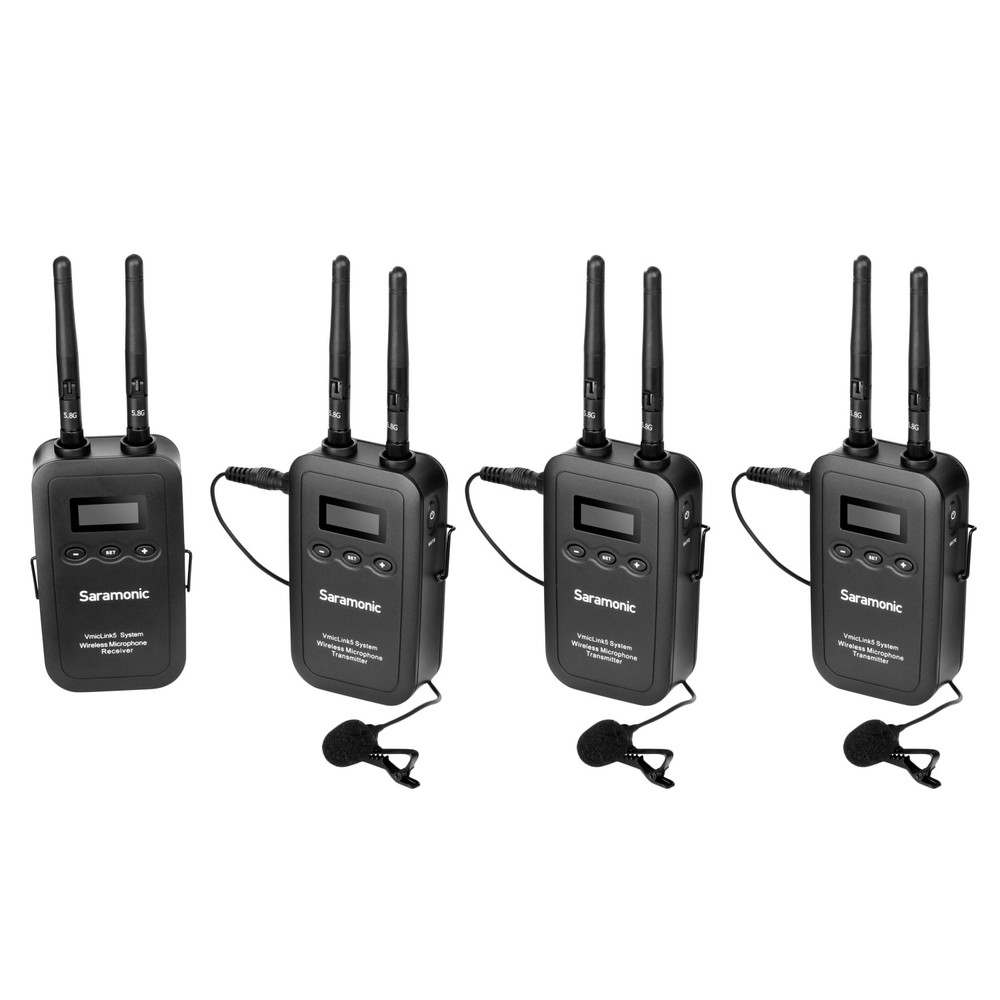 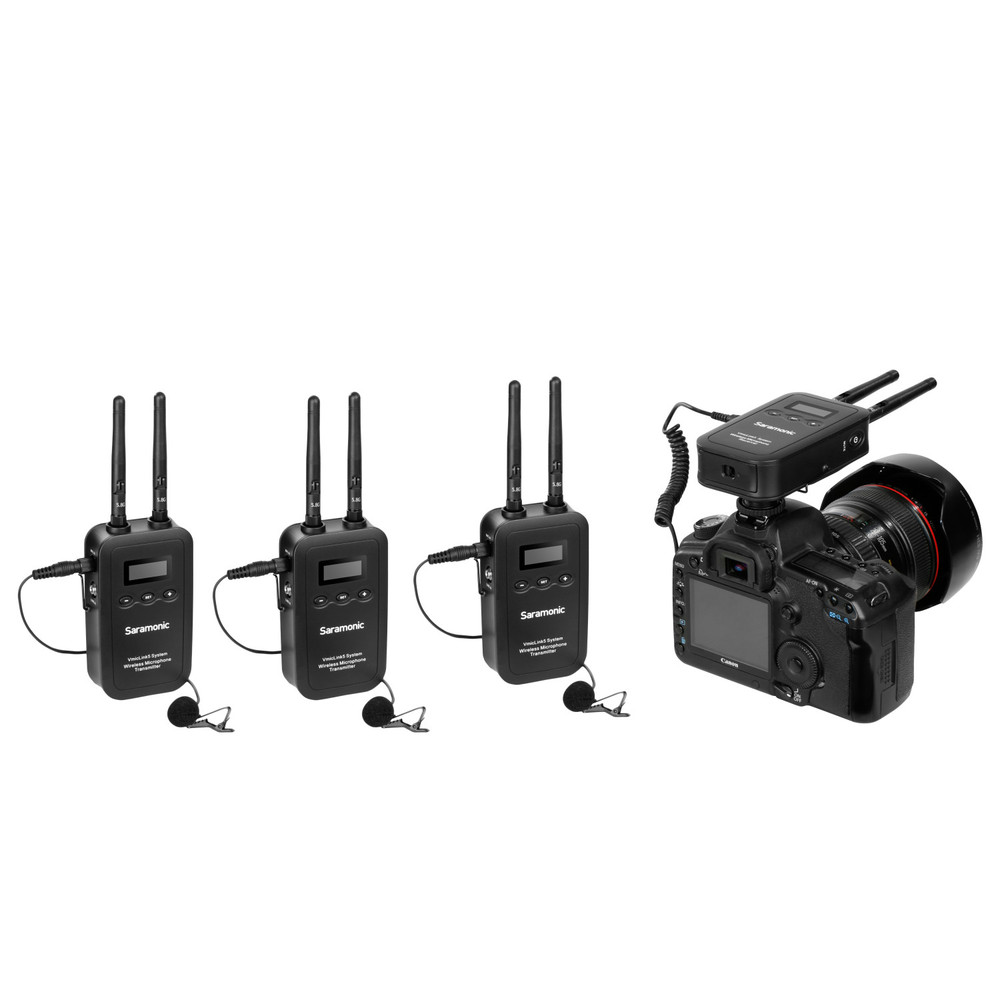 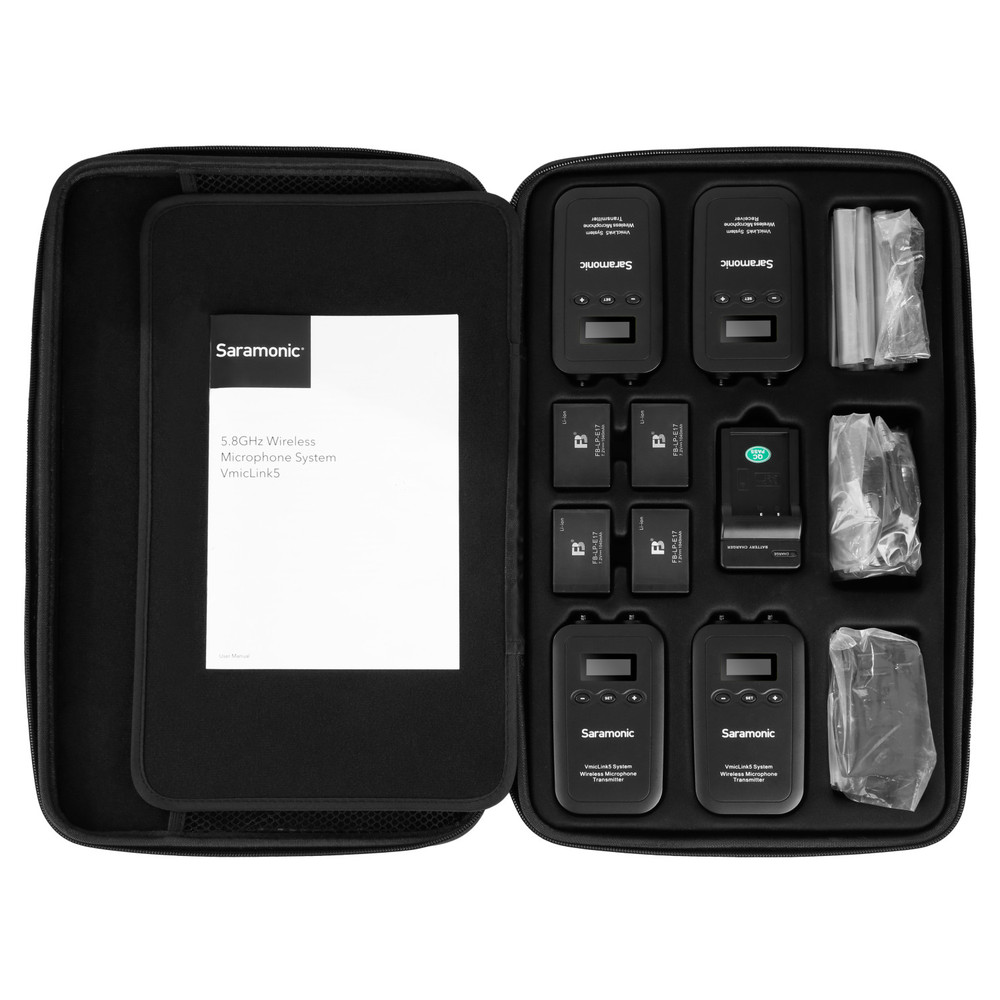 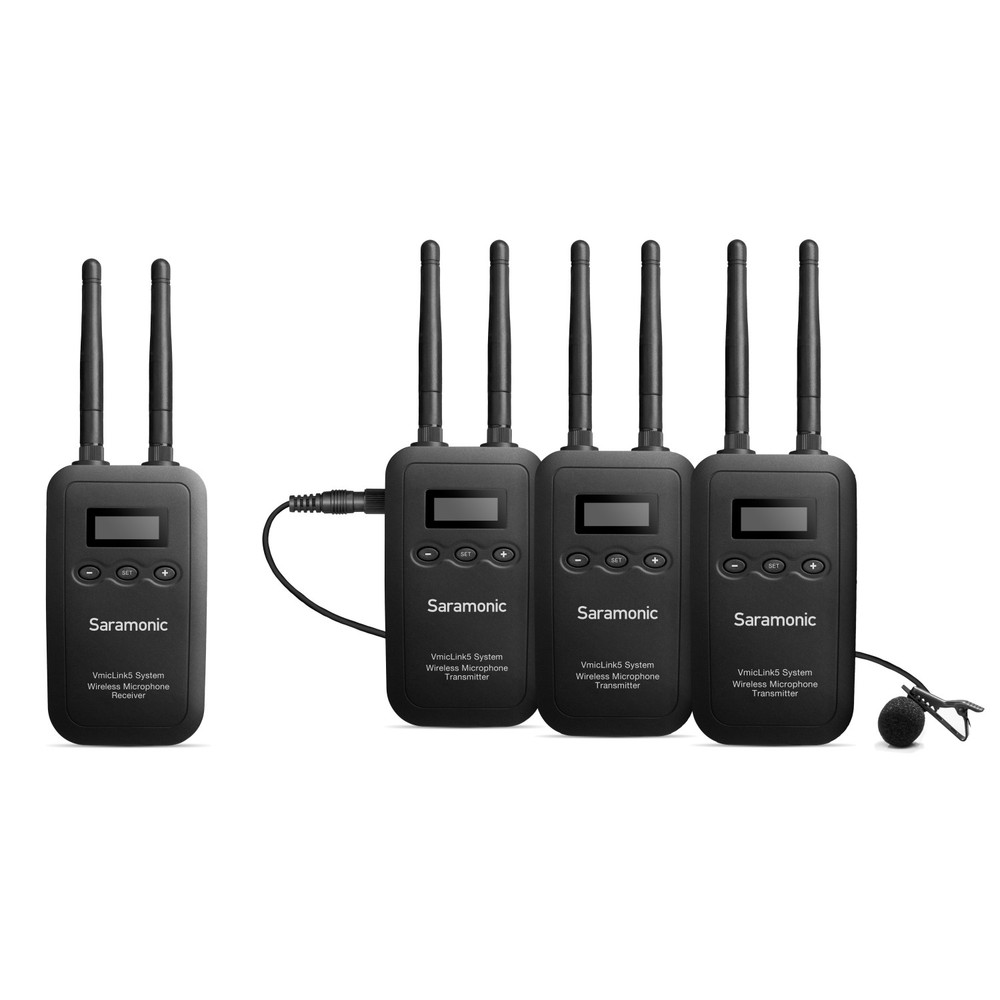 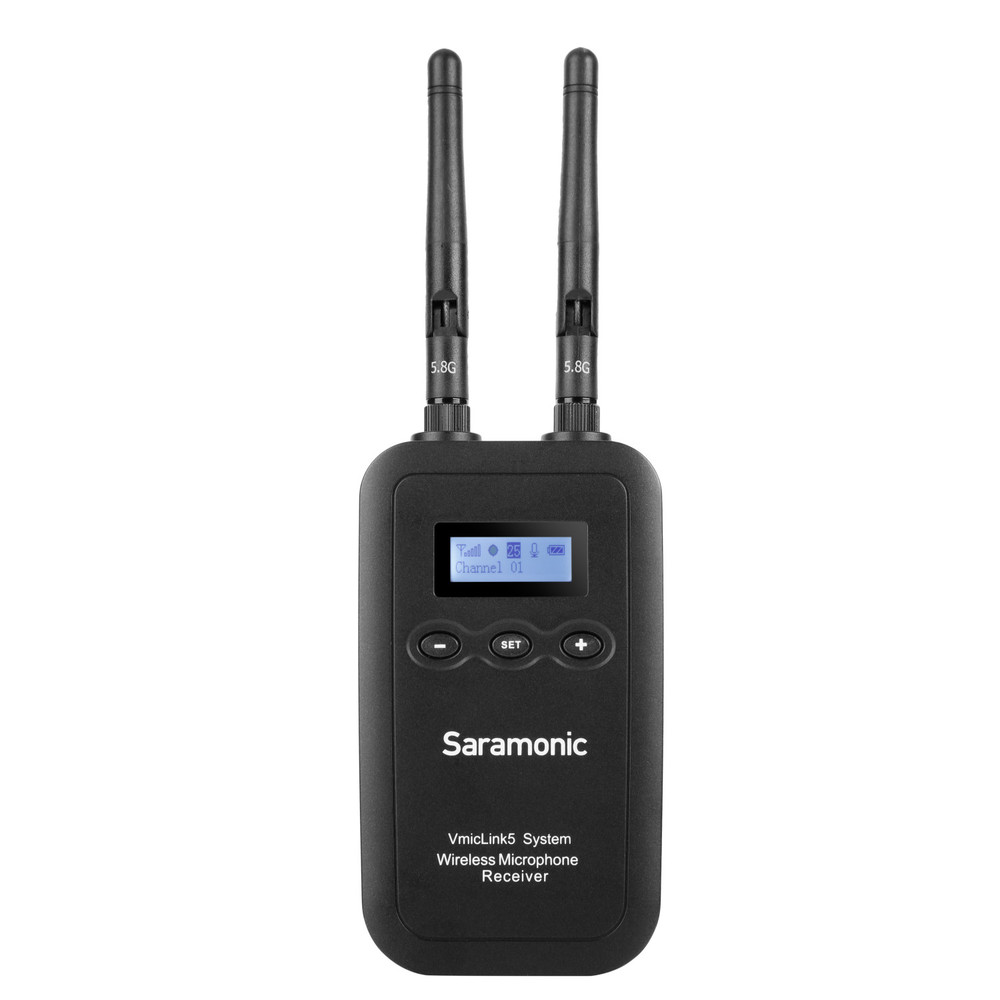 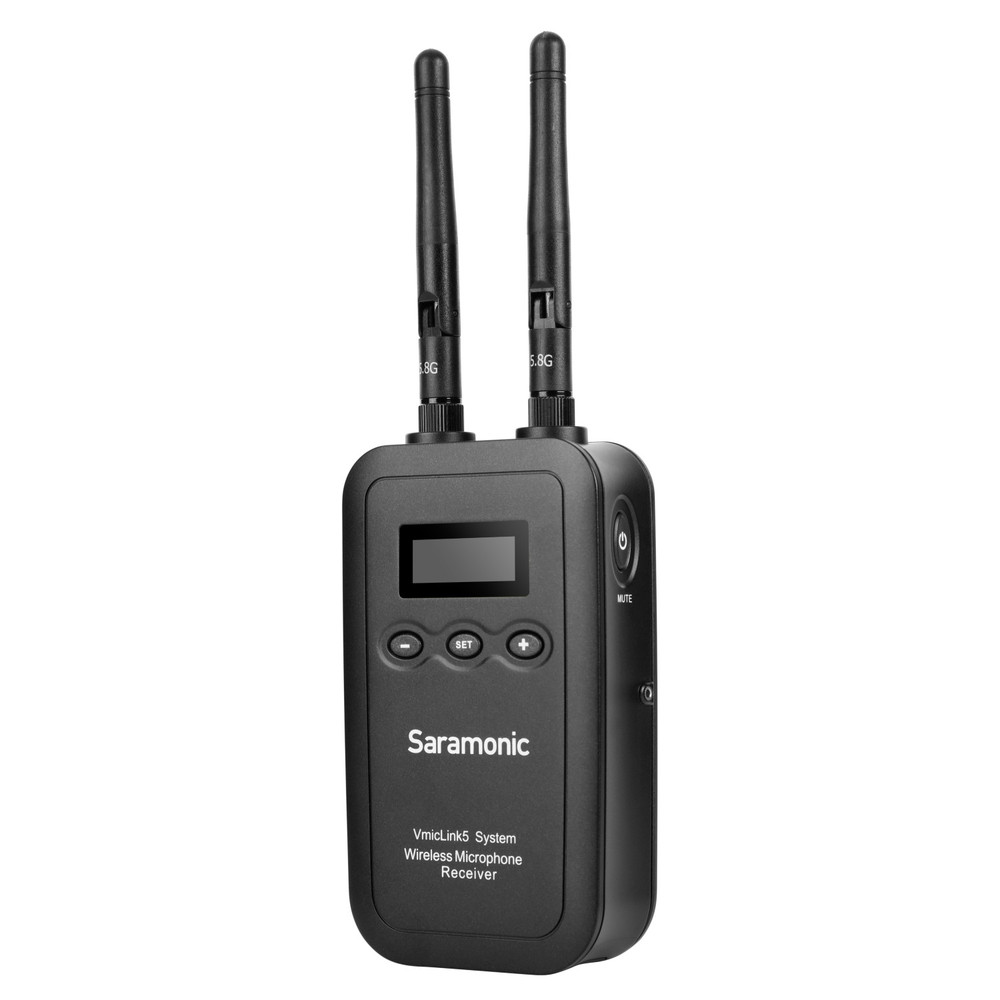 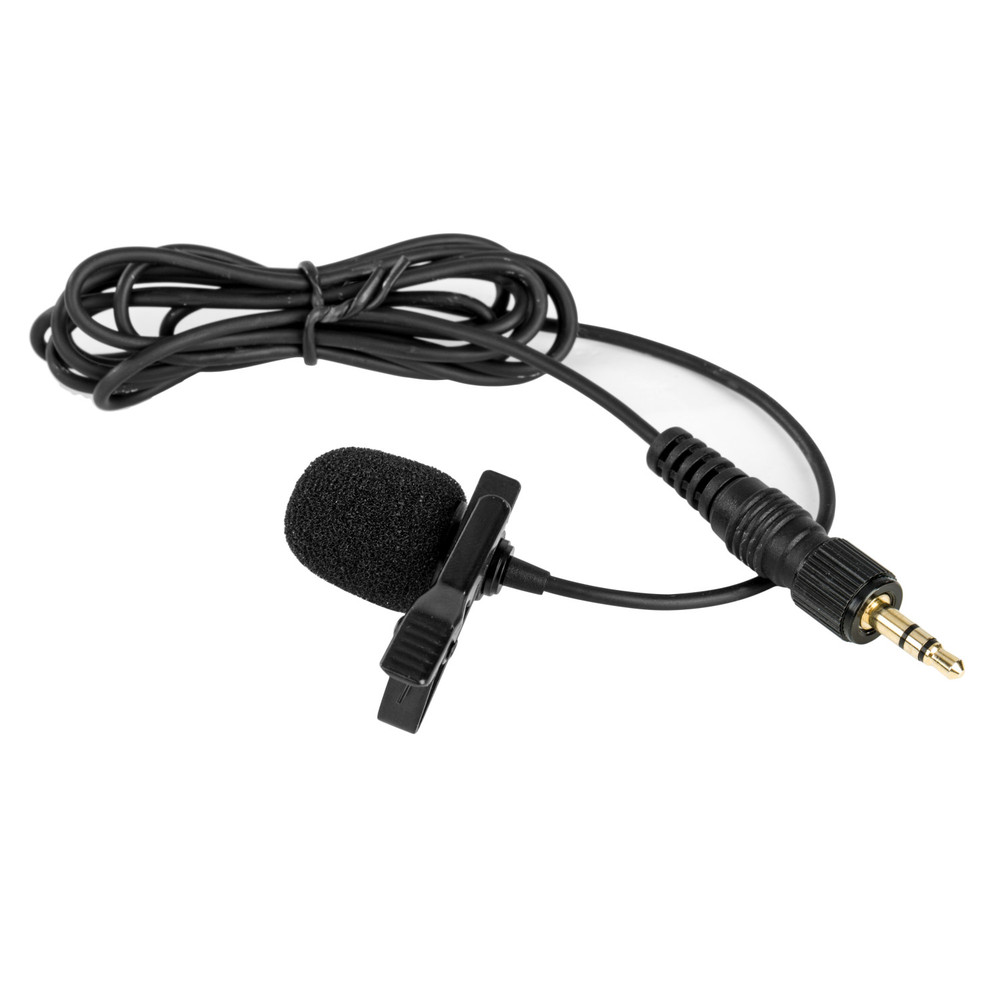 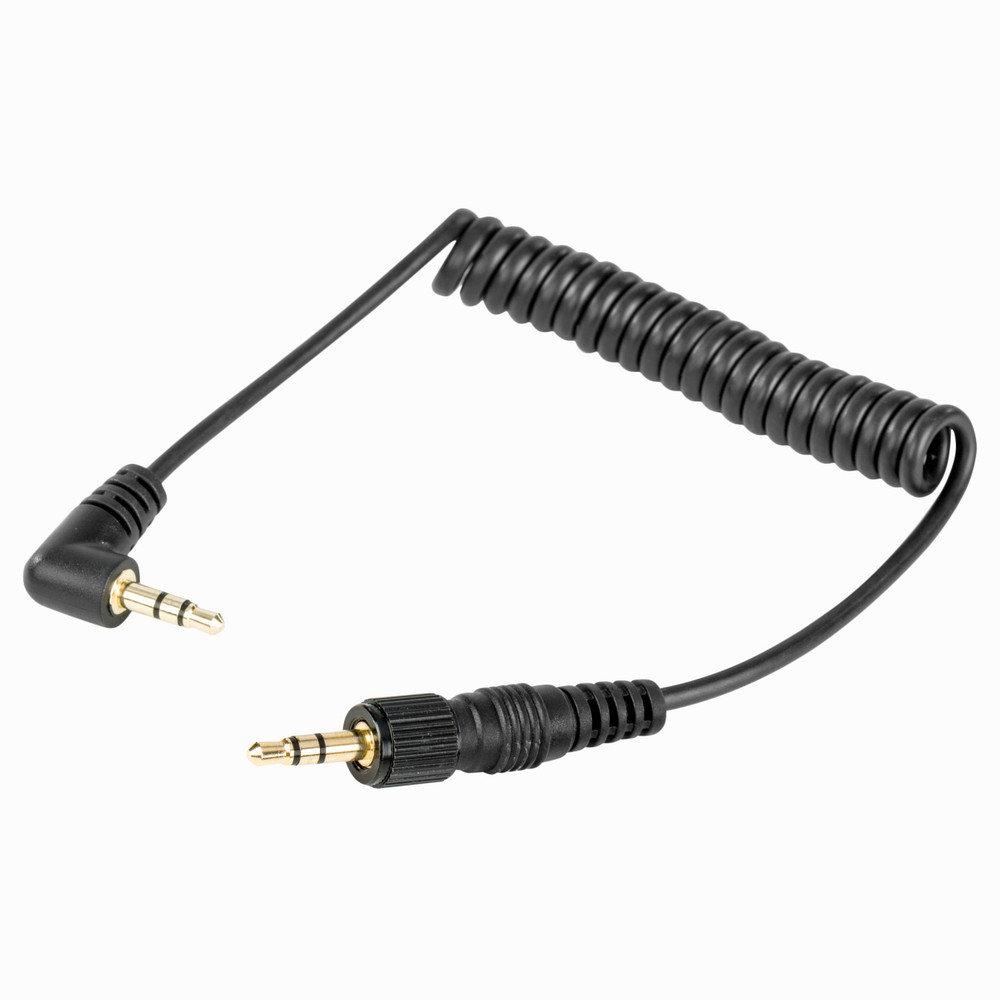 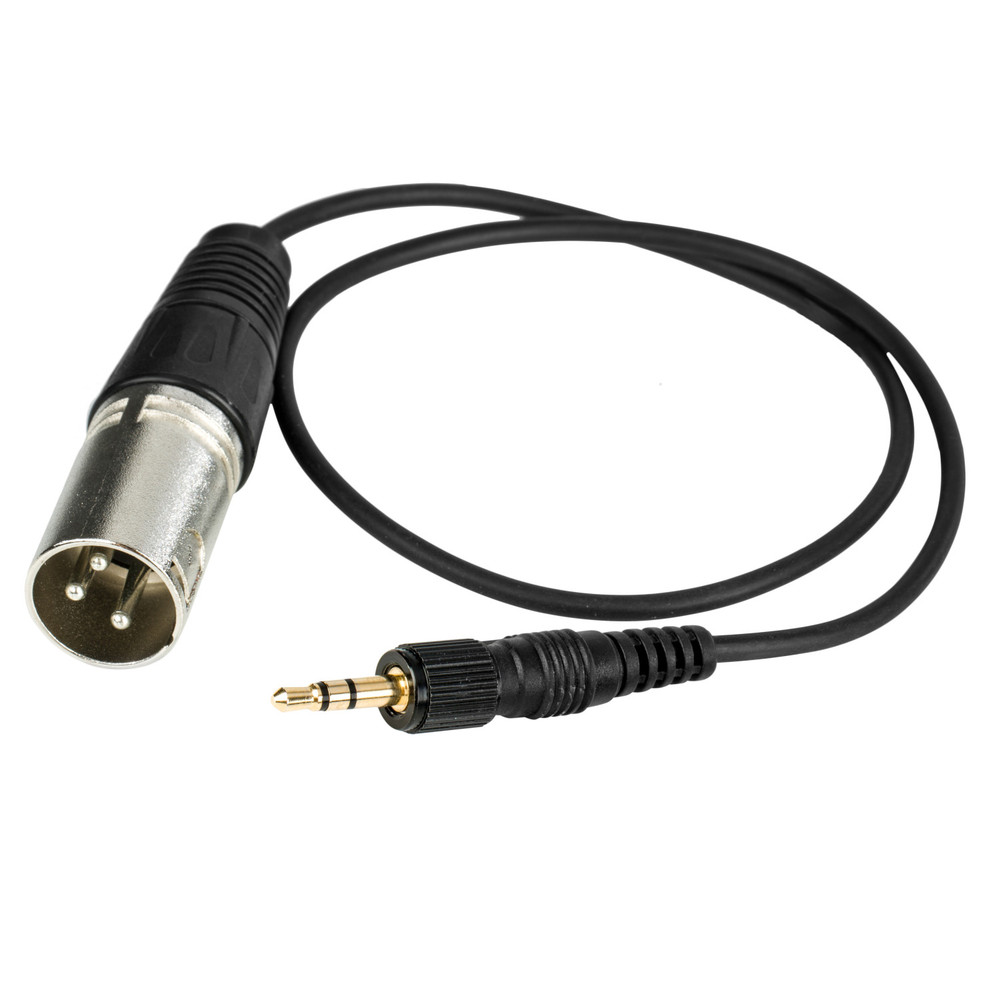 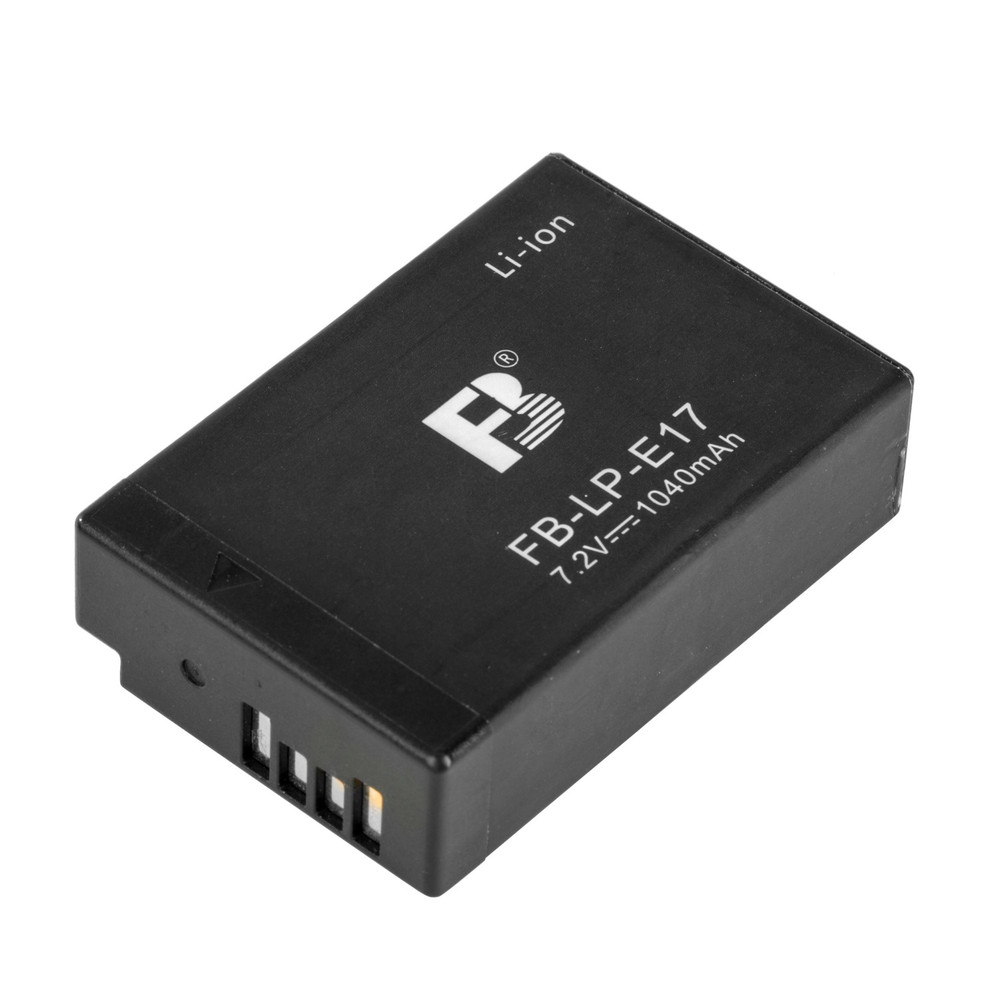 The Saramonic VmicLink5 RX+TX+TX+TX is a portable, three-channel, camera-mountable UHF wireless system that enables you to use clip-on lavalier mics on three separate people while only requiring you to attach a single compact receiver to your camera. This system is perfect for DSLR, mirrorless, video cameras or portable audio recorders for capturing interviews, event videography, film dialog, field recording, broadcast TV and news gathering.

The need often arises in video production to run more than two wireless microphones, but it’s always been difficult to do. It required mounting multiple wireless receivers to the camera, using a mixer of some kind, and juggling frequencies so the systems don’t interfere. Those days are over because the Saramonic VmicLink5 (RX+TX+TX+TX) makes this process incredibly easy all while offering broadcast-quality sound in a low-cost package.

The system works flawlessly right out of the box. Just plug in the mics, turn on the power and go. If it detects potential interference, it automatically switches the frequencies for you. All of these features not only make the VmicLink5 simple to use but create the easiest possible workflow.

The VmicLink5 utilizes the 5.8GHz frequency range, which is much higher and much less congested than 2.4GHz, UHF, and VHF. No other commercially available wireless systems work in the 5.8GHz range. Each unit gets 6 hours of power from included lithium-ion rechargeable batteries, so you won’t be wasting money on disposable batteries.

The VmicLink5 features a single, lightweight RX receiver that mounts to your camera and handles the audio from all three of the included transmitters. The receiver operates in Stereo or Mono output modes: Stereo mode mixes transmitter group A and C on the left channel, and transmitter B on the right channel. Mono mode mixes transmitters A, B and C into both left and right channels. The receiver also features individual level controls for each transmitter and a headphone output enables real-time audio monitoring if your camera lacks a headphone output. Locking 1/8” (3.5mm) mini-plug and XLR output cables are both included so you can use the VmicLink5 with DSLRs, mirrorless, cinema, camcorders, recorders and professional video cameras.

The VmicLink5 includes three TX transmitters and SR-M1 omnidirectional lavalier microphones. The transmitters feature a locking 1/8” (3.5mm) microphone input and a dedicated line input that makes wirelessly capturing audio from an external source a snap. The TX transmitter also features a combination Power/Mute button which can be “locked” when in use to prevent accidental muting or powering off.

A custom molded carry case is also included, providing an easy way to transport the VmicLink5 or to provide even more protection when in a bag. Additionally, optional output cables (sold separately) are available, giving you unrivaled connectivity. They make it possible to connect the receiver to smartphones, tablets, computers, GoPro cameras and more.

What can you do with line-level inputs on the transmitters? Here are just a few example scenarios:

Presentations:
If you’re shooting video of a person speaking on a stage, you can use one transmitter and a lavalier mic on them, so your camera will get clear sounding audio of their voice. Plug a line output or a headphone output from the PA system into the line input on another transmitter, so your camera will get great sounding audio from anyone else who speaks during the presentation, as well as segue music, etc. Put the VmicLink5-RX receiver in Stereo mode to keep the channels separate for better audio mixing options in post-production.

Weddings, parties and celebrations:
The VmicLink5 kit enables you to mic one or two people at a party and use the third transmitter to connect to the sound system at the event. This way your camera will clearly record the voices of your subjects, in addition to capturing nice sounding background music, and the voices of people who speak through the sound system.

Product demonstrations:
With the VmicLink5 (RX+TX+TX+TX) you can have two people on camera wearing lavalier mics and use the third transmitter for a line-level signal. If they’re demonstrating an electronic musical instrument, you can plug a headphone output or a line output from the instrument into the line input on the transmitter. Or, if they’re demonstrating software, you can connect the headphone output of the computer or mobile device to the line input on the transmitter.